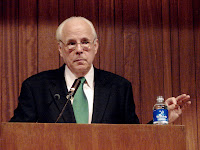 On October 24, former White House aide under President Richard Nixon, John Dean, spoke at the Glendale Public Library as part of their monthly speakers series. He gave a wonderful talk, full of his insights from his years in government. I purchased one of his recent books Conservatives without Conscience and had him sign it.

This book is highly critical of the current crop of conservatives in government, including President Bush and those around him. He believes that conservatism has lapsed into an amoral, power-hungry, intolerant authoritorianism, which bears little resemblance to the conservatism of Dean's mentor and friend, Barry Goldwater. He cites example after example of cases in which those who claim to be conservative, appear to have given up the pro-freedom, small-government, tolerant, nearly libertarian views that characterized older conservatives. It was a great read; he predicted the loss of the Congress and Senate by the Republicans in the last election.

The other book that I recently finished was John Grisham's The Summons. Grisham, you may recall ,write novels mostly about the legal profession in the South. They made movies of his other books, The Pelican Brief, The Client and The Firm, staring Tom Cruz. This book isn't quite as exciting as those other stories, but it involves an inheritance of millions of dollars, hot persuits by bad guys, and a twist at the end. It was an easy read and fun.

Another thing that I'm reading regulary is a blog in the Irish Language called Hilary NY. This blogger is a Gaelic speaker in New York City and writes weekly of things that happen to her in the city. She evidently is a teacher and is involved heavily in the Irish community in the City. Her level of writing is just about right for me, an intermediate learner of the Irish language. It is challenging, yet well written and not impossible for me to read. As I've mentioned in class, studying another language is a great way to actually build your intellgence. Learning a language is like growing another lobe in your brain; it gives you insight only another culture can give you.
Posted by Professor Dennis Doyle at 8:03 PM

Just a reminder that I need to serve on a hiring committee for a new English professor on Wednesday and Thursday of this week. All my classes are cancelled on these days.
Posted by Professor Dennis Doyle at 8:00 PM